How to create new markets through disruptive technologies 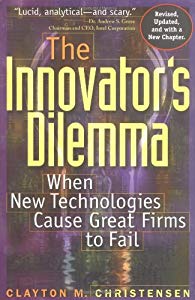 The Innovator's Dilemma is an Opportunity for The Little Guy

Steve Jobs popularized The Innovator's Dilemma by Clayton Christensen in his biography. As far as business books go, it's a demanding read. It explains how the most successful businesses in an industry are constrained to the point where they can't successfully launch disruptive technologies. Instead, smaller, more agile competitors are better poised to take the lead in that arena.

When I first opened the book, I expected an Alta Vista or a Lycos to be featured. These were some of the early popular search engines replaced by Google. Instead, the author begins with Sears! Sears is struggling badly now. At one time they were the gold standard for a well-run business in the U.S. They had the best store concepts, the best products, and the best management. Yet, because of the constraints success in existing markets forces on successful companies, Wal-Mart was able to launch the disruptive technology that has rendered Sears almost obsolete.

This not only has happened to Sears but to countless market leaders. Steve Jobs studied this dilemma and Apple became one of the rare market-leading companies able to consistently introduce disruptive technologies. The chief reason for this is that Jobs focused on great products first and profits second. The typical market leader has struggled. The Innovator's Dilemma identifies the following key obstacles:

What happens then is that established companies are trapped by their current market success and their decision making does not allow them to place a significant priority on creating new markets through disruptive technologies. This creates the opportunity for smaller emerging companies to leapfrog the established firms. Think of how Google jumped over the bigger players in the search engine market.

What are the established companies to do?

The Innovator's Dilemma suggests they either establish a separate company which can serve as the innovation arm or partner with companies who can innovate for them. Many companies have begun to explicitly build in "tinkering time:" company time where their staff can basically play with new ideas and hopefully come up some market-moving innovations. This approach has some question marks as well (see The Trouble With Tinkering Time from the Wall Street Journal).

The Innovator's Dilemma is written from the large incumbent's standpoint. It provides advice and strategies for large companies to recognize and deal with this very significant threat to their position. Now what we need is the guide for the up-and-comer. If the large incumbents are vulnerable and small, aggressive, ambitious companies are better poised to create new markets through innovative technologies, what can the little guy do to take advantage of this opportunity?

I can't claim to have the answer. But here are a few thoughts on the key attributes of disruptive technologies from Mr. Christensen:

If you are an innovative company feeling you have an idea or product that can knock off the incumbent, these attributes of disruptive technologies are important to be aware of. The other thing I would recommend is to bear in mind there are no rules of business which ensure the existing behemoths will always be there. Sears was once the best company around; Wal-Mart didn't even exist when Sears was in its heyday.

Oct. 12, 2021 | Posted by Emma Carter
You need a website if you’re selling products and services online. This is an excellent marketing tool that can be used to attract potential leads and customers. However, what if you’re not...
Read More

Oct. 1, 2021 | Posted by The Alternative Board
You have invested the time, money, and resources needed to build a great website. But how do you draw traffic to it? This is the question on every entrepreneur's mind, and rightfully so. Your website...
Read More

How to Create a Landing Page that Works for Your Business

Sep. 22, 2021 | Posted by The Alternative Board
These days, marketing is all about getting visitors (and prospective customers) to explore your company’s website, often as a prelude to making that all-important purchase of your products or...
Read More

Digital Marketing Trends that Can Help Your Business

Sep. 15, 2021 | Posted by The Alternative Board
These days, “marketing” has become synonymous with “digital marketing” – a key element of any business’s overall approach to attracting and retaining customers.The good news is, effective digital...
Read More

Jul. 12, 2021 | Posted by Emma Carter
Why is search engine optimization so important for your website? One of the lessons learned from the recent Covid-19 pandemic concerns the need for businesses to boost their online presence. Right...
Read More

May. 10, 2021 | Posted by The Alternative Board
In our last post, we began to review 17 Essential Traits of Successful Entrepreneurs. Here we will continue looking at additional great tips from the TAB community.  #8 Endurance in the face of...
Read More