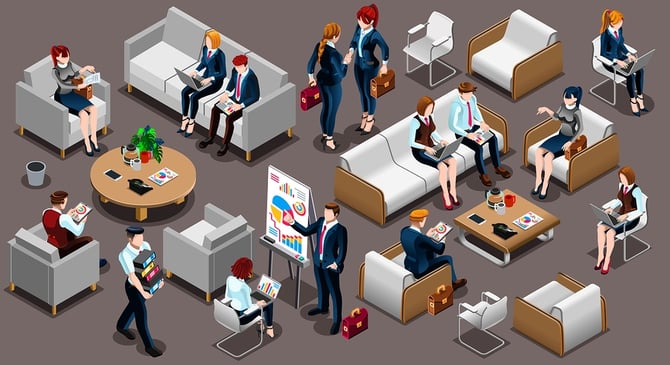 Keep the Board, Change the Room

It's probably not every businessperson's idea of the best part of the work day: the business meeting. It can be boring and long-winded, people might be afraid to express opinions—all sorts of reasons. However, the time of the dry and monotonous business meeting are over.

Nilofer Merchant, who serves on public and private company boards and has worked for major companies such as Apple, tells Wired she conducts one-on-one meetings as walks. So what about taking notes, using a whiteboard and cell phone reception? Technology, Merchant stresses, isn't the key factor in a successful meeting. Sure, it can help facilitate a meeting, but it's not what drives a good meeting.

One-on-one interactions, says Merchant, allow people to explore ideas, connect with each other and developed a shared purpose, and for those, nothing beats a side-by-side walk. Merchant also says many people wait until the meeting to share information, which wastes time going over "background" during the actual meeting. She recommends sending information in advance, which facilitates a better discussion by allowing people to form ideas and ask other people their viewpoints.

See how Bob Parsons handled meetings when he ran GoDaddy.com. Parsons founded Go Daddy, the world's biggest domain name registrar, and was the CEO for many years. The company has annual revenue of about $350 million and manages 32 million domain names for about six million customers around the world. So, you can imagine Parsons was a pretty busy guy. He told Inc.com, however, that he was almost never behind his desk. Instead, he spent most of his day meeting with his staff. He'd sit at a cafeteria-style conference table, which he bought for $90, and about a dozen chairs. The utilitarian furniture conveys the right attitude, Parsons says: functional and cheap.

Meetings are more than just tables and chairs, though. As GoDaddy's Bob Parsons says, "You don't spend your money on office furniture—you spend it where it's going to impact your customers." Parsons says he managed everything from a 57-inch monitor hanging from his office ceiling, which he accessed with a wireless mouse and keyboard. Set to Go Daddy's home page, a program tracks the company's current market share and how many domain names it registers daily.

The Wall Street Journal also acknowledges more business meetings are literally "stand-up jobs." For example, Atomic Object, a software-development firm in Grand Rapids, Mich., conducts company meetings first thing in the morning with nonwork chitchat kept to a minimum and everyone standing up. The object of such a meeting, according to the WSJ, is to get rid of long-winded meetings where people pontificate, play Angry Birds on their cell phones or simply tune out.

The meetings rarely last more than five minutes, after which employees perform a quick stretch and get on with their day, Atomic Object vice president, Michael Marsiglia, tells the WSJ. Such meetings have been found to be effective. The WSJ says Allen Bluedorn, a University of Missouri business professor, conducted a study in 1998 that discovered standing meetings were about a third shorter than those than involved sitting, with the quality of decision-making about the same.

So not only can business meetings be shorter, they can be just as effective, and without all the chaff — and the fancy, expensive chairs.

How about you?  If you find yourself leaving the boardroom for board meetings, what's the preferred venue?

Jennifer Rosen is a cross-country runner, a small business advisor, and freelance writer who lives in Boston.

How to Achieve Business Success by Knowing Your Strengths and Weaknesses

May. 10, 2022 | Posted by Phil Spensieri
Over my years as a business coach, I’ve heard hundreds of stories about how and why my clients got into business. Each story differs, but one thing remains common: every one of them got into business...
Read More

May. 5, 2022 | Posted by Joe Zente, TAB Austin
Inflation Busters: 15 PAINLESS ways to Reduce Your Business Expenses April 20th, 2022 “Frugality drives innovation, just like other constraints.  One of the only ways to get out of a tight box is to...
Read More

Apr. 29, 2022 | Posted by The Alternative Board
It is still a tough labor market out there. The Great Resignation and the dearth of eager job candidates are keeping business owners shorthanded and clamoring for new talent. In many cases, this...
Read More

The Importance of a Leadership Development Plan

Mar. 15, 2022 | Posted by Phil Spensieri
As a business owner have you ever given any thought as to who will replace one of your senior staff if they were to resign today? It’s a hard question, and the truth is no one really knows when...
Read More

Protecting Your Business in a Time of COVID

Feb. 4, 2022 | Posted by The Alternative Board
If anything demonstrates the role of uncertainty in today’s business landscape, it must be the nagging persistence of COVID-19 around the world. Only last year, it appeared the pandemic might be...
Read More

Aug. 26, 2021 | Posted by The Alternative Board
Running a business is a costly, time-intensive process. Costs and time can grow exponentially if an organization lacks a system whereby products are made, or services rendered in a consistent manner....
Read More

Apr. 20, 2021 | Posted by The Alternative Board
We often hear stories about the difficulties of making a family business partnership successful. Yes, there are unique hurdles that differ from other types of business models, but with the right...
Read More

Apr. 13, 2021 | Posted by The Alternative Board
There may be only 24 hours in a day, but with effective time management, business leaders can get a lot done within that limited timeframe. The key is taking steps to eliminate clutter and...
Read More