Avoiding the IKEA Effect in your Business: How? Why?

We have a family tradition for Mother’s Day when we go to a truck stop for brunch. Everyone gets a kick out of it. But it’s a really good truck stop. The place is called Johnson’s Corner. It was just like any other highway truck stop until 1998 when Travel and Leisure Magazine rated it one of the top 10 breakfast spots in the world. The cinnamon rolls alone are worth the trip. We typically turn it into a full day by visiting a nursery down the road to pickup flowers to start our Spring planting.

This year, we had to change plans. We had a very large Spring snowstorm on Mother’s Day – not uncommon in Colorado. We battled the snow to go to Johnson’s Corner. But the nursery was out of the question. Instead, my wife lead a family trip down to IKEA. I hadn’t been to IKEA for ages. A new one was built in the Denver metro area a few years back. This place has a 3-story parking garage and is simply massive. Lots of folks had the same idea on a snowy Mother’s Day – the place was mobbed.

We picked up a few odds and ends there. We didn’t have much in the way of assembly. But as I observe people load one large box after another into their SUVs, I was reminded of the IKEA Effect. Shankar Vedantam, from NPR and “Hidden Brain” fame, did a story on the IKEA Effect. The theory is that the more you invest of yourself in something – time, money and emotions –the greater the value you place on it. The link to IKEA is that you become more invested in IKEA furniture than a fully built piece of furniture because you invested effort putting the IKEA piece together. 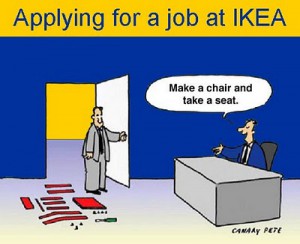 “IKEA Effect” is a clever name. But the concept of Not Invented Here has been around for a very long time in business. Some business owners and executives believe that if their business hasn’t developed a concept, process or system, it isn’t good enough for them. It’s true that a business can develop systems or processes that are perfect fits for their business. And, that a third-party process or system will need to be customized. But at what cost?

This kind of thinking also leads to the Sunk Cost Effect. Once a business has sunk tens or hundreds of thousands of dollars into a project, well, you just have to get some kind of return out of it. This is understandable at this level of investment. But how do you prevent getting into this situation?

The way around this is to utilize third party, objective advisors and to fail early. Before you get too emotionally invested in your project, it’s wise to get significant objective review and input from someone with expertise in the area you are working on. Or, better yet, get advice from other business owners. As one TAB member recently said, only fellow business owners understand the “intricacy of the decision making” that you are going through. If you do receive feedback that, well, your baby isn’t as pretty as you think, don’t be afraid to stop the project early. Letting a bad decision or program drag on is only going to make it that much harder when you need to make the inevitable decision.

5 Ways To Show Customer Appreciation This Holiday Season & Year Round

Nov. 30, 2022 | Posted by The Alternative Board
While showing your appreciation for your customers should be a year-round activity, the holidays are a particularly fantastic time to express gratitude to those who support your company. Never...
Read More

3 Customer Service Hacks That Will Keep Them Coming Back

Nov. 23, 2022 | Posted by The Alternative Board
Great customer service is one of the biggest drivers of customer satisfaction and retention. Customers care about the treatment they receive from a business - and how that engagement makes them feel...
Read More

How to Thank Customers for Supporting Your Business

Feb. 24, 2022 | Posted by The Alternative Board
These days, after what seems an eternity of business restrictions due to Covid-19, companies are rightfully grateful for returning customers, and new prospects willing to give their business a...
Read More

Use Customer Feedback to Pivot Your Business

Nov. 17, 2021 | Posted by The Alternative Board
The global pandemic has prompted a wide range of businesses to pivot and repurpose their products and services in new ways. Changing market conditions often mandate that businesses evolve (whether...
Read More

Jul. 2, 2021 | Posted by The Alternative Board
No business wants to get a bad review for its products or services. However, since it’s impossible to please all customers all the time, the likelihood of encountering dissatisfied customer reviews...
Read More

Journey Mapping and the Road to Customer Retention

Jun. 22, 2021 | Posted by The Alternative Board
How well do you know your typical customer’s purchasing journey? Successful businesses work hard to understand this journey, from initial awareness of a need for your product, the subsequent...
Read More

A Quick Guide to Winning Back Lost Customers

Jun. 15, 2021 | Posted by The Alternative Board
Losing a customer is always cause for concern, but it can also be a learning opportunity. Businesses face a constant challenge of thoroughly understanding customer buying behavior, and when that...
Read More

Dec. 28, 2020 | Posted by The Alternative Board
We hear a lot of talk about the importance of employee engagement, but how well do members of your sales team engage with current and prospective clients? Whenever a customer and salesperson talk...
Read More

5 Ways to Surprise and Delight Your Customers in 2021

Dec. 17, 2020 | Posted by The Alternative Board
Customers are a lot savvier than they used to be. With tools like the internet and social media at their disposal, they can do a great deal of preliminary research before embarking upon the...
Read More

How to Improve Your Team’s Customer Service Skills

Dec. 10, 2020 | Posted by The Alternative Board
No one can predict what will happen to the business landscape in 2021 (look how far off the experts were about 2020, pre-coronavirus pandemic!). But one constant will remain in place next year, and...
Read More