How to develop thought leadership inside an organization 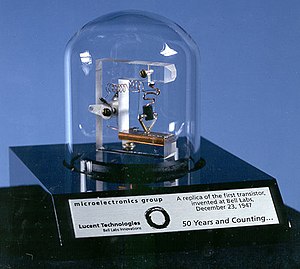 Who is your Harvey Nyquest?

Have you ever heard of Harvey Nyquest? Not many people have. In fact, with all the buzz about Apple, Google, and the like, Bell Labs doesn't even come to mind very often. Bell Labs is probably the single most influential organization to the information and communications revolution we've been benefiting from for over a generation. Apple and Google stand on the shoulders of the Bell Labs giants.

Bell Labs was the research and development arm of AT&T from the 1920s through divestiture in the 1980s. Bell Labs included both scientists and engineers. The scientists would come up with a new discovery and the engineers would turn it into a practical application. Bell Labs innovations included such diverse and important endeavors as the transistor, communications satellites, the laser, fiber-optics, and the Unix operating system.

Bell Labs is chronicled in a The Idea Factory by John Gertner. This history describes the key individuals, their personal histories, and the discoveries of Bell Labs. It also explains some of the cultural aspects of Bell Labs, such as the building design that supported collaboration, which many contemporary companies have adapted to generate a culture of innovation.

So what does this have to do with Harvey Nyquest? Unlike his colleagues, Nyquest never won a Nobel Prize. He is important in a very different way. One researcher attempted to find what the most successful Bell Labs scientists had in common. He discovered that the most productive individuals, based on the number of patents, had one thing in common: they had breakfast or lunch with Harvey Nyquest.

Nyquest was not particularly creative or successful himself. His skill was that he asked the right questions to draw out other people's thinking and help them generate their insights.

One of my favorite quotes that I've found applicable in business is by Voltaire:

"Judge a man by his questions rather than by his answers."

One other relevant quote from The Idea Factory jumped out at me. Said of Bill Baker, head of the research division, by one of his researchers:

"A small number of times in my life I have been in the presence of someone who didn't necessarily answer the question I asked but instead answered the question I should have asked."

My takeaway from this is to be careful not to undervalue someone who doesn't necessarily stand out and have the best ideas. Some of these individuals may just quietly be making the rest of an organization a whole lot more successful. Check out The Alternative Board's PULSE Survey on Business Leadership for more insights on modern business leadership.

Quick and Easy Way to Maintain an Active LinkedIn Presence

May. 27, 2022 | Posted by The Alternative Board
LinkedIn is a mainstay social media platform for business owners and professionals. No news flash there. But while most of us understand that having an engaging LinkedIn presence can bring tremendous...
Read More

Tips For Improving Your Networking Skills This Spring

Apr. 19, 2022 | Posted by Phil Spensieri
Love it or hate it, networking is essential for business growth and success. It’s often the bane of existence for many business owners that I work with. But if done right, you can take the hassle of...
Read More

Apr. 15, 2022 | Posted by The Alternative Board TAB
The process of product innovation has, for some time, relied upon a cadre of forward-thinkers within an organization, and/or soliciting input from customer surveys and focus groups. These methods...
Read More

Apr. 13, 2022 | Posted by Dave Scarola
I am fresh off of a TAB Summit in Amsterdam where we met in person for the first time in over 2 years with 20 Master Partners representing 16 countries. What a magnificent gathering. It was great to...
Read More

When a Business Owner Wears a Selling Hat

Mar. 4, 2022 | Posted by The Alternative Board
If you are like most business owners of small or mid-sized businesses, there are times you must put on your Selling Hat. When you put on that Selling Hat, your mindset needs to change to one of “What...
Read More

This Addiction may be Costing You Millions

Jan. 7, 2022 | Posted by Joe Zente, TAB Austin
Let’s be brutally honest. When you sell…: Do you feel anxious to tell buyers why your product, service, or company is great? Are you more comfortable talking & presenting versus asking tough,...
Read More

Oct. 28, 2021 | Posted by The Alternative Board
Cold calls and other approaches to phone sales might not be considered as vital as they once were, but many businesses still rely on this method for customer acquisition. That’s all well and good, as...
Read More

Oct. 26, 2021 | Posted by The Alternative Board
Sales meetings, like business meetings in general, come fraught with potential minefields. They’re often perceived by team members as a waste of time, too predictable and boring, not long enough or...
Read More

Oct. 19, 2021 | Posted by The Alternative Board
Aside from new customer acquisition, repeat sales is the “holy grail” of all company sales departments. Having customers come back again and again for your products or services should be at the very...
Read More