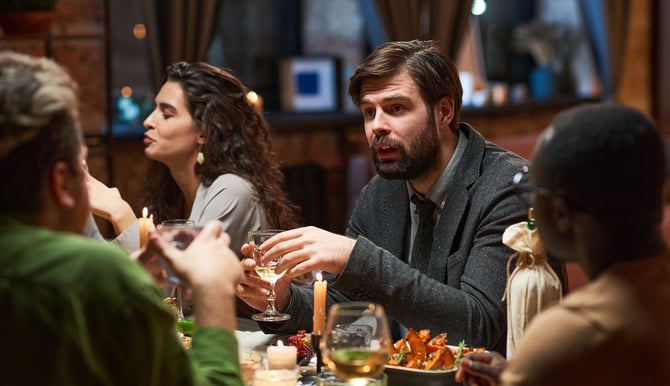 At a small dinner party, in which at least one member of each couple owned a successful business, the host asked each business owner to share the one characteristic they felt attributed most to the success of their companies. I want to share some of the responses because they are all attributes that business owners can acquire, should they decide to do so.

The first person to respond said he attributed his company's success to his own unwillingness to accept defeat. At the time, he owned a company that produced a product known worldwide. Early on, the product had not sold well, even though he felt the product was very effective. Instead of giving up, this owner decided to do a fresh start "reboot" of the product. The reboot included changing the product name and packaging, as well as the profile of the customers he would target. He even changed the marketing messaging. What he didn't make any changes to was the actual product because he wholeheartedly believed in it. The risky reboot resulted in the business climbing from failure to incredibly profitable – and ultimately the successful sale of the business.

Another dinner guest, who owned a very successful health care business, shared her belief that the attribute she felt made the biggest difference in her company's success is her ability to focus. Often, she had to use self-discipline to keep her focus on issues she referred to as "big picture matters" rather than day-to-day problems that came up that threatened to fully absorb her time. She said she would not allow herself to become distracted from the big picture needs of her business by things that just weren't as important to the company. She added that there is always small stuff that can pull you away from the big picture every day, but she refuses to let it happen.

A third business owner expressed her attribute she believed most impacted the success of her company was that she enjoyed the process rather than only deriving joy from the achievement. She explained that she had a passion for what she did, even when others - including some family members and friends - might not understand her passion for the business. She explained that it was this passion that resulted in her spending long hours in her business. It bothered her that she did not require self-discipline to work long hours, but instead perhaps needed self-discipline to not work relentlessly. But she added that this passion kept her from burnout even when the intensity at work was rather extreme at times.

Three stories of business owner success. One dinner table. It was a wonderful evening.

Allen Fishman is the Founder and Executive Chairman at The Alternative Board (Worldwide) and Allen Training Centers, Inc. Allen is also a best-selling author and former Business Insights nationally syndicated columnist.