If there’s one constant in running a business, it’s negotiation. Whether it’s negotiating a contract, salary, or executive decision, your ability to persuade can (and will!) determine your effectiveness as a leader. While there are countless ways to approach a negotiation, the little choices you make can have a huge impact on your business and its bottom line.

So whether you get a thrill from the art of negotiation or the back-and-forth leaves you sleepless, these go-to tips can help you through your next big negotiation:

Waging a war never got anyone very far in business. It creates hostile relationships which are likely to haunt you later in your business career. Instead of trying to “win” your negotiation, approach it as compromise. How can each party get the most bang for their buck without compromising the other’s financial security, flexibility, or happiness?As the business world moves further and further into a transparency model, so should your negotiation strategy. Be honest. Be open. Explain why you need what you need from the other party and be empathetic to their concerns. A positive negotiation experience is likely to lead to a positive ongoing relationship with the employee, vendor, or client in question.

“Practice, practice, practice,” says TAB President and CEO Jason Zickerman. “Before going into a negotiation either role play or work through every request that could come up during the discussion. Be prepared for every possible scenario.”Going in without practice is a bad idea -- a slip of the tongue, or simply not knowing the answer to an important question could come off as a lack of confidence, which will hurt your negotiations. 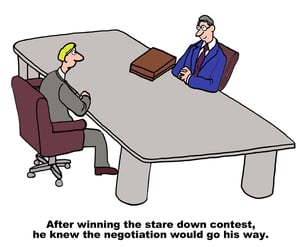 Enter negotiations from a place of power.

Never go into a negotiation with a lot to lose. When the stakes are that high, you need to assess whether the negotiation is worth the potential loss. If you plan on heading into a high risk negotiation, be sure to have other options available to you if the outcome is not in your favor. According to negotiation expert Ed Brodow, you should “always be willing to walk away.” Not only does this prevent you from “caving in to the other side's demands simply to make a deal,” says Brodow, but “if you recognize that you have other options - the other negotiator will sense your inner strength.”

Make sure the party you are negotiating with understands that you are open to discussion. If they feel they’ve been heard and their issues were truly considered, it can be enough for them to move on, even if the answer is no. Zickerman encourages business owners to “say yes” as often as possible during negotiations. “Even if you do not like a particular suggestion, let them know that you like some of their thinking. Saying ‘no’ in negotiations is inevitable, so there should be a conscious effort to say ‘yes’ and then reposition what you need out of the particular issue. The reception from the party you are negotiating with will be much improved by using this practice."

During negotiations, remember that business is business, and the other party’s demands do not reflect on you as a person. The other party does not want to earn or pay less, because they think your company is not valuable (they wouldn’t waste their time on negotiations if they felt that way) -- they simply want to get the best deal for themselves (isn’t that exactly what you’re doing on the other end of the table?). Taking negotiations too seriously can create biases, or even worse, bad tempers, which can sour the relationship indefinitely. In a world where referrals are your company’s most powerful weapon, the worst thing you can do is tarnish your reputation with a bad negotiation.On the other end of the spectrum, be sure to identify emotional roadblocks in the person you are negotiating with. “Try to figure out a way to give up something to help them get past this potentially less rational need,” says Zickerman.

Keep your strategic plan at the forefront of negotiations.

The best way to keep negotiations focused and neutral is by knowing how the different outcomes will fit into your strategic plan. By maintaining an adaptable strategic plan, you should be well aware of what your business needs to get where it needs to go (and where there’s room for flexibility).

“Know in advance what is most important to you in the negotiation, and what isn’t,” adds Zickerman. “Many folks ultimately lose a very good opportunity due to poor negotiations – simply because they were trying to win things that were not that important.”

Create a list of priorities for the negotiation. Consider where you’ll have to take a firm stance and where you can offer some flexibility without sacrificing your long term goals. This approach guarantees that the outcome, even if not entirely in your favor, will not compromise your goals.

Ditch the ego, but don’t give in to intimidation.

Don’t intimidate or be intimidated. Intimidating the other party can end a negotiation before it begins. You also give up the smart hand of letting the other party think it’s getting away with something.On the opposite end of the spectrum, giving into intimidation puts you at an immediate disadvantage, says Entrepreneur and crowdSpring co-founder Ross Kimbarovsky. “Once you allow yourself to be intimidated, you’ll have difficulty getting your needed concessions during the negotiation.” As a small business owner, you cannot be afraid of working with larger enterprises; they’re your ticket to growth. Sure that’s a lot of pressure, but with everyone waiting for the other party to set the tone of the negotiation, it’s up to you to create an assertive, yet compassionate model.

When it comes to negotiation, the best thing you can do is negotiate and negotiate often. Each negotiation will get easier and reveal new tactics to put towards your next negotiation. Do your homework and be prepared. Know what compromises you can make without compromising the success of your business.

TAB’s Strategic Business Leadership (SBL)® process helps you define your vision of success, so you can work your business towards that goal. By determining your destination and the path to get there, you’ll know exactly where you can give and take in negotiations and approach them more assertively.