Leadership versus Management: What’s the difference?

In recent years there’s been an ongoing debate in business circles regarding Leadership vs. Management. While the concept of visionary leadership has been trending positively, the once noble role of management has become somewhat maligned. But before you throw out your copy of (outdated management book name - any suggestions?), let’s get past the semantics and cut to the core of which traits realistically help business owners get the best results from their team.

What makes you a leader?

Let’s begin this analysis by defining what we mean by “leadership” as it relates to modern business owners and CEOs. The late management guru Peter Drucker wrote, “The task is to lead people. And the goal is to make productive the specific strengths and knowledge of every individual.” In this regard, we will refer to private business owners or executives who are tasked with inspiring their direct reports - and consequently, the entire organization -  as leaders.

You might envision a dynamic business leader as someone who is full of charisma, with the ability to convince their team to line up behind them and accept orders. But as management author Tom Peters so eloquently put it,  “Leaders don't create followers, they create more leaders.”

Convincing your staff that your vision is worth following is a key element. But rather than enforcing subordination, a gifted leader will seek to spread their message virally by empowering every department head to lead their own division with the same enthusiasm and dedication.

Employees often emulate the values and standards they see displayed in the actions of their leaders, so creating a company culture of integrity and mutual respect will strengthen a company from the top down. To expound on the importance of respect, David Scarola, vice president of The Alternative Board, spoke to journalist Nicole Fallon for a recent Fox Business article entitled 5 Leadership Weaknesses and How to Fix Them.

"The best leaders have learned that if they make the right decisions for their business, even if unpopular, and also take the time to explain their reasoning, they will earn the respect of their employees," Scarola said. "In the long run, this is the best outcome a leader can aspire to."

When did “management” become a bad word?

In some ways, visionary leaders are portrayed as the new heroes of the modern business era. But every hero needs a villain and, as the management vs. leadership discussion gained traction in business articles, managers were often portrayed in a less than favorable light. In other words, being a mere manager was seen as unfashionable or tied to the past, while striving to be a leader was admirable. But is this just semantics and the evolution of business language, or is there more to it?

Traditionally, many business managers ruled their subordinates based on fear and control, reward and punishment. As the psychology and technology of leadership evolved, the old ways became outmoded. Bosses who cling to the bully tactics of intimidation are becoming less common in the modern work environment.

While it is still important, and natural, to have an established hierarchy within certain organizations, the methods of getting the best results out of your staff have become less draconian. Certainly, managers are not all heavy-handed in the ways they impose their authority. In fact, a common managerial trait is the desire to not rock the boat.

According to an article at ChangingMinds.org entitled simply, Leadership vs. Management, “An interesting research finding about managers is that they tend to come from stable home backgrounds and led relatively normal and comfortable lives.” The piece goes on to clarify, “This leads them [managers] to be relatively risk-averse and they will seek to avoid conflict where possible. In terms of people, they generally like to run a 'happy ship.'”

So for the purposes of this article, we will refer to managers as those who are appointed to a position of authority within a company and given a specific set of tasks to implement while overseeing a designated group of employees.

Analyzing the Differences Between Leaders and Managers

In June, 2014, The Alternative Board surveyed 336 business owners to get a street-level view of what leadership actually looks like in practice. When asked what the most important trait was in terms of dealing with their employees, 63% of owners said their role was to inspire action. Yet when the same owners were asked which function matters most to running their company, 46% of participants identified accomplishing goals as most important vs. just 38% who said setting a vision comes first.

In other words, the real leaders feel their role is to inspire the team, yet realize that all of the motivational speeches in the world won’t mean a thing if their team doesn’t ultimately see successful results. This illustrates how a hybrid of forward-thinking leadership traits and a proven managerial skill set is likely the best combination for business owners to both inspire and provide for their organization.

Warren Bennis, author of Learning to Lead: A Workbook on Becoming a Leader, summed up the management vs. leadership distinction succinctly. “To manage means to bring about, to accomplish, to have charge of or responsibility for, to conduct. Leading is influencing, guiding in a direction, course, action, opinion.”

This chart outlines the differences between leaders vs. managers: 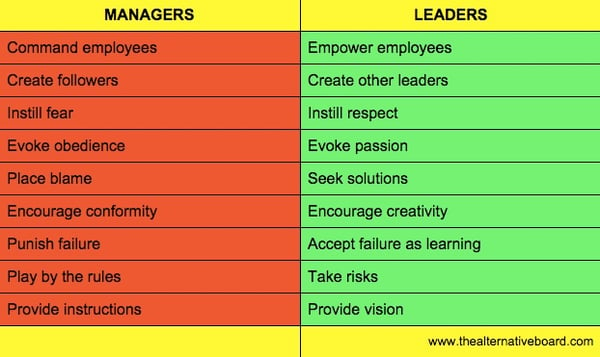 Management vs. Leadership: What are the dangers of becoming one at the exclusion of the other?

While it’s obvious that eschewing modern leadership traits in lieu of an old-fashioned managerial style could put business owners behind the times, heading too far in the other direction has its drawbacks too.

As Bob Sutton put it in the aforementioned article, “Some leaders now see their job as just coming up with big and vague ideas, and they treat implementing them, or even engaging in conversation and planning about the details of them, as mere ‘management’ work that is beneath their station and stature."

Also, not every business will be perfectly suited to implement the most forward-thinking leadership strategies. For example, Drake Baer recently reported in Business Insider how leaders like Virgin’s Richard Branson followed the lead of Netflix founder, Reed Hastings implementing a policy of unlimited vacation time for all salaried employees.

While this policy seems to be working for certain Silicon Valley tech startups like Netflix—who have been “rigmarole-free” since 2002—such liberal ideas may not play as well with all business institutions. The Business Insider piece also points out, “Slate writer Matthew Yglesias says that the only companies that would dare ‘offer unlimited vacation do so because they're confident their employees won't choose to take much time off.”

This comparison shows that in the leadership vs. management debate, there may be times where traditional, tried-and-true management systems work best in the short term. That’s not to say leaders should ever stop innovating and taking risks with potentially groundbreaking ideas. But as with many things in life, moderation is likely the key to finding the right balance between experimental leadership concepts and functional management practices.

However, for a company to truly rise above its competition risks must be taken. TAB CEO and President Jason Zickerman boldly states, “Visionary Leaders will look for the best thinking, not the safest. The most creative solutions, not the most cautious.”

How can you become a better leader?

Visionary leadership is not an exclusive club limited to the top most members of organizations. It takes place at all levels, and can involve all people in an organization.

In his book, Scaling Up Excellence, Bob Sutton says, “Spreading and sustaining excellence depends on skilled leaders throughout an organization– not just the top dogs.”

Jason Zickerman has some specific advice for business owners in his newest white paper -- “Forget no one in the company as you convey what’s ‘in it for them.’ Whether it’s someone doing research, analysis, administrative duties, sales or presentation development, your job is to make sure each person on the team sees, understands, accepts, knows and embraces what they can do personally to help achieve the vision. Then, you need to make them feel good about it.”

If you’re looking for additional resources on ways to improve your leadership techniques, the four business owner books TAB founder Allen Fishman penned will open your eyes to new ways of successfully running a business.

Better yet, explore how joining a TAB board will give you the benefit of learning from other business owners who know what you’re going through and know how to help you overcome obstacles to enjoy greater success!

Discover the best of the best tips to help grow your business from business leaders around the globe. Subscribe to our monthly Tips from the Top e-zine here (unsubscribe at any time)

May. 10, 2021 | Posted by The Alternative Board
In our last post, we began to review 17 Essential Traits of Successful Entrepreneurs. Here we will continue looking at additional great tips from the TAB community.  #8 Endurance in the face of...
Read More

Email Marketing in the Age of COVID-19

Oct. 22, 2020 | Posted by The Alternative Board
In spite of all the changes rocking the business landscape, experts agree that email marketing remains a consistently effective way of reaching customers. In part, this is because companies can...
Read More

7 Ways to Market your Business for Next to Nothing

Sep. 11, 2020 | Posted by The Alternative Board
Marketing need not be a mystery or expensive. For many business owners who are tightening their belts and reducing expenses, marketing expenditures are often the first to get trimmed. The truth is,...
Read More

How to Prepare Your Clients for a Price Increase

Sep. 3, 2020 | Posted by The Alternative Board
Every business must, at one point or another, share what’s viewed by customers as “unwelcome” news—the need for a price increase for products or services. Some businesses simply set the wheels in...
Read More

How TAB Helped A Member Grow During COVID-19

Sep. 1, 2020 | Posted by Phil Spensieri
Since the start of the COVID-19 pandemic, many businesses have struggled to survive. But for some, the pandemic has provided an opportunity to thrive. Garden Connections is one of those businesses. ...
Read More

The best piece of business advice I have ever received is…

Aug. 28, 2020 | Posted by The Alternative Board
When you’re a business owner, your best lessons often come from two places: failure or wise words from owners who have been there. There are going to be inevitable ups and downs in every enterprise....
Read More

10 Ways to Find Hidden Money in Your Business

Jul. 16, 2020 | Posted by The Alternative Board
With the strains of rolling shutdowns across the country, many businesses are finding their profits diminished or uncertain. Many leaders are relying on tried and true revenue generating strategies...
Read More

9 Tips to Create a Company Culture in a Virtual Workplace

Jun. 26, 2020 | Posted by The Alternative Board
As businesses around the world have gone virtual, digital tools have helped keep most aspects of our work life functioning. Many businesses are reporting increases in productivity, with activities...
Read More