How Data Analytics Can Transform and Improve Your Business 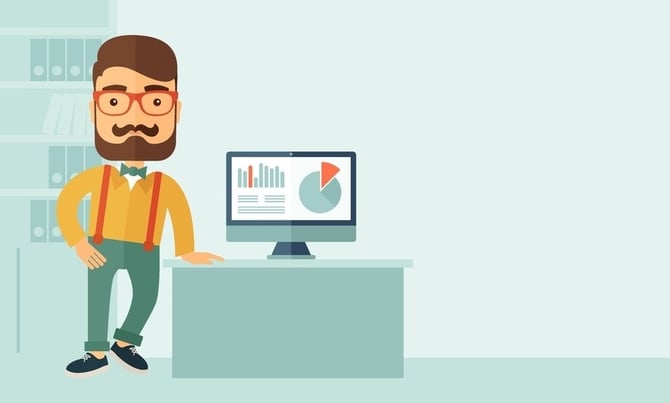 When applied wisely, data analytics can be the difference between mediocrity and greatness for a business. Geoffrey Moore, the author of Crossing the Chasm, summed up the value of data analytics beautifully. He said, “Without big data analytics, companies are blind and deaf, wandering out onto the Web like deer on a freeway.” Big data or otherwise, knowing how to leverage your business’s data to make decisions is critical for success.

To be perfectly clear, though, Moore wasn’t referring to raw data in his quote. Collecting data, storing data, or even talking about how much “big” data one has is utterly useless unless the data is analyzed. Enter data analytics. Data analytics deals with extracting insights from the data to take action. Call it actionable data analytics.

So where might one find this data that can be actioned? Well, it is everywhere! From your website’s performance to your marketing efforts, we are inundated with gobs of data every day. The tragedy of it is that very little of this data is actually analyzed and actioned. And that’s what I’d like to talk about in this post. Let’s take a look at a few examples to understand how the data you have today can help you make transformative business decisions.

Web analytics refers to the set of techniques used to collect, measure, and analyze web performance data. Whether you use your website for marketing and lead generation purposes or for conducting online business, measuring the effectiveness of your site’s performance will help you make important business decisions. This is particularly important if you have a transactional website.

Let’s use the example of a fictitious company called Cool Widgets, which sells widgets online. Mike, the owner of Cool Widgets, wants to increase his company’s revenue by 15 percent year over year. After six months of shooting in the dark with no tangible results to show, he asked his data friend Paul to help.

He then pulled data from Cool Widgets’ Google Analytics account and organized it as shown below. This approach combined channels, user experience, and products to show revenue generated.

Paul then showed Mike that increasing revenue by 15 percent could be achieved by increasing one or more of the components (channels, user experience, or products) that make up revenue. So Mike could increase his monthly traffic (channels) to 11,500 sessions, improve the site’s conversion (user experience) to 3.19 percent, or increase the average order value (products) to $372 to reach his business goal of increasing revenue by 15 percent.

When Mike looked at his web analytics data in this light, it became instantly clear to him how he could achieve his target growth. He realized that spending all the money in social media to drive traffic wasn’t really helping him. His social media traffic converted at a very low rate (0.4 percent) and it also had the lowest average order value (AOV) of his top four channels.

Using web analytics, Mike was able to figure out how to increase his company’s revenue by 15 percent. While this was a specific example of how to leverage web analytics to meet business goals, it can be used for a variety of causes, including conversion rate optimization, finding root causes for site performance issues, and so on.

Let’s take a look at another example of how data analytics helped Mike yet again.

Once Mike concluded he needed to grow traffic to meet his goals, he started looking at the sources of traffic to his site. He quickly realized that he was going to need to focus on channels that he could directly influence. So he narrowed down his options to paid media. In other words, he was going to buy traffic, but clearly not all paid traffic is equal. Some traffic such as paid search converted way better than sponsored ads in social media. Now that he knew data analytics could help, he turned to Paul for assistance.

The first thing Paul did was to standardize how he looked at the data. So he pulled all the data from Google Analytics and looked at it from a campaign perspective. A campaign is a finite set of ads grouped together because of something they share in common. For example, a set of ads about the same product could be labeled a campaign for that product.

Paul then explained concept of Cost Per Acquisition. CPA is a metric that measures how efficient a campaign is in acquiring a customer. The lower the cost of acquisition, the more money Mike could put into that campaign. Here is what Cool Widgets’ campaign analysis looked like:

Mike had been spending over 50 percent of his budget on the 2015 package AB campaign. It was driving the most traffic of all his campaigns (1,100 sessions per month). However, it was also the most expensive ($38.5 per acquisition)! This perspective into the data helped Mike realize that he was better off spending money on any other campaign than the 2015 package AB campaign. Using the power of marketing analytics, Mike was able to quickly figure out how to spend his marketing budget in the most efficient manner.

While this example was specifically about improving the efficiency of paid search, Mike could have used marketing analytics to improve the effectiveness and efficiency of every marketing channel.

Given how late it was in the year, Mike needed more than just one channel to drive traffic. He had to figure out another way to increase his revenue. There was another highly lucrative opportunity that he hadn’t fully tapped into – customer analytics.

Cool Widgets had a fairly deep database of over 15,000 past customers. It sent out emails to this list of customers every month to drive repeat traffic. They were already getting a good number of repeat purchases from their customers. And yet Paul knew there was something else there. So he started looking at who these customers were. He analyzed past customer data to figure out how to segment them.

Segmenting is just a fancy term for grouping things together based on some common attributes. Cool Widgets was sending the same emails to all their customers on a regular basis. Paul wondered whether all customers really had the same interests and whether they all had the same buying power.

So he segmented Cool Widgets’ customer data along past purchase history. It was one of the easiest segmentations he could do to find actionable insights, and he took this data and joined it to the most recent month’s transactions. What he found was astounding.

The reason for this drop in AOV was that Cool Widgets used the same email campaign to market to all its customers. So instead of a high value customer seeing a higher priced item, everyone saw the same items that the mid value customers gravitated toward.

Mike quickly put together three distinct campaigns for each of his customer segments and started talking to them about widgets they cared about.

Using customer analytics, it is possible to understand the purchase behaviors and preferences of your customers. This information can then be used to effectively market to these customers.

Cool Widgets used data analytics to make key decisions that put them on the path to achieving their business goals. More often than not, companies across all industries have access to operations, marketing, and transactional data. Whether the company is engaged in online activities or offline is really immaterial. What’s important is to put the data available to good use in driving actionable insights.

Here are three final pieces of advice when getting into data analytics:

Abhi Jadhav is a member of TAB Metro Dallas and the Managing Partner at Bay Leaf Digital, a Google Analytics consulting firm based in Dallas. He has been practicing data analytics for over a decade. During his corporate career, Abhi led product management, SEO, analytics, and conversion rate optimization (CRO) teams at Travelocity. Abhi’s latest venture is Amplytics, a web analytics audit tool for web analysts and technologists.
Previous Post
Next Post
Follow Us: