5 Entrepreneurs Who Started at the Bottom (Now They're Here.) 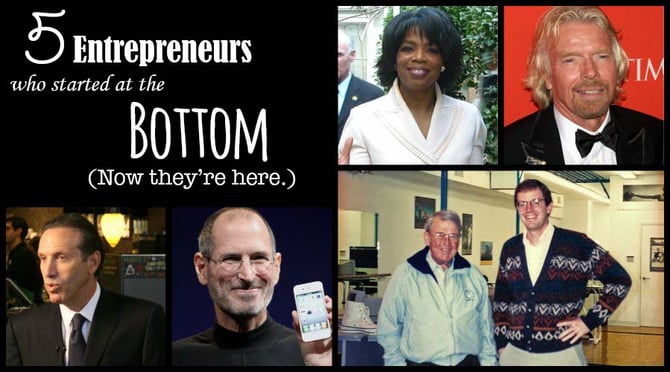 What do Steve Jobs, Howard Shultz, and Oprah Winfrey have in common? They built their business empires from scratch. Get inspired by these 5 brilliant billionaire entrepreneurs who started from nothing and climbed their way to the top:

The executive of all executives and perhaps the most innovative leader of the 21st century, the acclaimed Apple founder started out as little more than a college dropout. Apple was literally born out of Jobs’ parents’ garage without the enormous venture capital startups today are used to. What was once a small home operation is now a $320 billion phenomenon. Who said a garage isn’t a great place to start a business?

It’s almost impossible to imagine this Virgin mogul without a giant jet behind him in an exotic location spouting brilliant advice about how to be the next billionaire. But once upon a time, he was a humble sixteen-year-old with a student magazine that earned him $8,000 worth of advertising in its first edition. His entrepreneurial pursuits led to his small record shop in London – Virgin Records. How did that tiny shop become the global brand it is today? Not through a ton of capital, but hard work and smart moves on part of this net £3.6 billion entrepreneur.

Oprah Winfrey represents so much more than her net worth of $3 billion. An executive, producer, performer, and humanitarian, Winfrey overcame huge setbacks on her way to success. She was raised by a single teenage mother in Mississippi where she experienced countless hardships, including sexual assault and a failed pregnancy. Despite turbulent beginnings, she was able to whip her career into one of the most admirable of the era.

We can only assume that Howard Schultz’s home today looks nothing like the Brooklyn housing project where he grew up. If it wasn’t for a football scholarship to Northern Michigan University, Schultz may not have had the opportunity to be the first member of his family to graduate from college. When his job at a small coffee bean store dismissed his idea of opening an espresso bar, Schultz took it upon himself to create his vision of success and build his own store: Starbucks. His net worth is now estimated at $2.8 billion.

Got $538? Turns out that’s enough to get you $57.9 billion dollars. When Bill Hewlett and Dave Packard began working on their audio oscillator startup out of a garage, they had no more than $538 to their name and a used drill press. Talk about an effective return on investment! Now 76 years old, HP is one of the world's leading information technology companies, with over 300,000 employees and enormous revenues. To this day, it’s considered the symbolic founder of Silicon Valley.

While startup capital helps, it’s not the be all end all to any business’s success. Just because you’re operating out of your living room does not negate your potential to grow into a billion dollar business. The first step in evolving from your couch to hundreds, thousands, millions, even billions of dollars is a strategy for success.

The Alternative Board’s Strategic Business Leadership® planning tool helps business owners at every stage of their career create a path for growth. Whether you’re starting with a million dollars in venture capital or $538 and a drill, there’s no better way to formulate a plan for success.

Discover the best of the best tips to help grow your business from business leaders around the globe. Subscribe to our monthly Tips from the Top e-zine here (unsubscribe at any time)