Words to Avoid in Business Meetings and Coaching Sessions 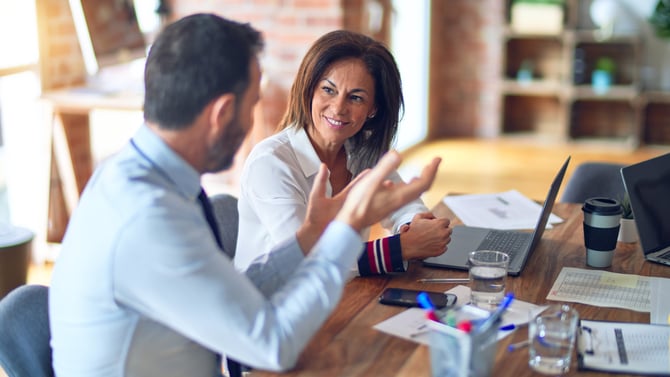 The way we say what we say matters. Never is this more true than within a Business Coaching or meeting environment. Though usually unintentional, there are certain words that can create tension and defensiveness within a coaching session or really any type of business meeting. The late comedian George Carlin had a very popular bit called “The Seven Words You Can’t Say on Television.” Likewise, but certainly tamer, there are a number of words and phrases that should be avoided within business meeting and coaching environments.

WHY: WHY questions help uncover a person’s thinking that seemingly led to a decision they have made. So why then would we want to avoid using it? Because WHY can lead to defensiveness, which is certainly not a desirable engagement tactic. Within a business coaching dynamic, questions are asked to gain genuine understanding, not as a challenge. But people often construe a WHY question as contentious. For anyone who has taken Carl Gould’s training, he explains there are three words that can often be implied at the end of any WHY question: “you dumb a$$.” For example, “Why did you share that information with all your employees, you dumb a$$?” Instead, strong communicators should replace WHY with WHAT and HOW. For example, “What compelled you to share that information?”

BUT:  BUT is a highly judgmental word. For example, a business owner states during a coaching session, “I made a decision to promote Amy to my second in command.” The coach might respond by saying something like, “Sounds like an interesting decision, BUT haven’t you been thinking about firing Amy recently?” Adding the BUT implies a high degree of judgment. What that business coach is really saying is, “That doesn’t really sound like an interesting decision, but rather a very questionable one.”

Improv comedy actors often use a very effective approach to circumventing the BUT conundrum. It is called the “Yes, and...” approach. The “Yes” part means the person affirms what has been presented to them, then the “and” part is additive to the discussion. For the scenario above, the business coach might replace his BUT response with, “Sounds like you made a thoughtful decision. How are you going to mitigate some of the concerns you expressed to me recently about Amy?” Using this approach, the coach accepted what the business owner just presented, then asked a clarifying question to help them better think through the transition.

INTERESTING: Like BUT, INTERESTING can also be construed as disapproving or vague. Do you mean INTERESTING good or INTERESTING bad? To negate any ambiguity or disapproval, an INTERESTING comment can be delivered in a way that is both clear and positive by simply leaning forward and responding, “Now that is really interesting.” On the other hand, if the word INTERESTING was used to in fact question the wisdom of a decision, perhaps a better approach would be to ask for clarity.

JUST: TAB Business Owner Denise O’Neill said that when mentoring women in particular, she often urges them to stay away from the word JUST. JUST is a modifier that tends to minimize what was said or is about to be said. Of course, the same applies to men too. As effective business communicators, it is essential to believe in what we are saying and not undermine our comments by using JUST.

IN REALITY: IN REALITY, we all have our own realities; we all see the world differently. What’s real for a business coach may not be real for the business leader with whom they are working. Using “IN REALITY” is simply not respectful verbiage. It implies that one person sees the world correctly, while the other does not. We want to stay far away from this one.

AT THE END OF THE DAY: Or whatever your tired, over-used favorite cliché is: “Think outside the box” or “In today’s world” or “Step up to the plate” or “Run it up the flagpole” or “Put your ducks in a row.” You get the idea. Ask for feedback from your significant other or trusted friend. What are your overused phrases that you should strike from your business conversations?

FILLER WORDS: Have you ever been to a Toastmasters meeting? They regularly have someone in attendance called a grammarian. Their role is to listen to a presenter’s speech and record how often the speaker uses filler words. Many people tend to start sentences with filler words like “I mean” or “So.” Let’s stop that. FILLER WORDS tend to be habitual with classic culprits like “um”, “like”, “well” and “you know” often rearing their vacuous heads. FILLER WORDS also include words like “literally,” “actually,” and “basically.” These words diminish clarity and in fact water down a message.

TO BE HONEST: This one is everywhere, so much so, there is even a commonly used text abbreviation associated with it (TBH). However, adding TO BE HONEST to a conversation implies a distinction from previous (apparently dishonest) communications.

AGAIN, at the END OF THE DAY, these are the words I JUST recommend avoiding in coaching and other business conversations, BUT that’s JUST me. IN REALITY, the words you choose are up to you. Just make sure to use them wisely.

Dave, one of our C-Level executives at The Alternative Board, has over 20 years of consulting, product development and technology experience across many different industries including telecommunications, hospitality, healthcare and financial services.
Previous Post
Next Post
Follow Us:

Feb. 2, 2023 | Posted by Lee Polevoi
It’s not unusual for a first-time CEO or business owner to experience qualms about their ability to handle the challenges they face. But it’s also true that many veteran business leaders encounter...
Read More

Jan. 17, 2023 | Posted by Lee Polevoi
In our information-saturated age, even the most diligent CEOs and business leaders can have trouble focusing on one thing at a time. When you lead a business, workplace distractions often prove...
Read More

3 Customer Service Hacks That Will Keep Them Coming Back

Nov. 23, 2022 | Posted by The Alternative Board
Great customer service is one of the biggest drivers of customer satisfaction and retention. Customers care about the treatment they receive from a business - and how that engagement makes them feel...
Read More

Nov. 2, 2022 | Posted by Phil Spensieri
With many businesses focusing their marketing online these days, in part due to the pandemic, the question as to the value of social media has once again become a hot discussion topic in my TAB...
Read More

How Well Do You Know Your Employees - And Why It Matters

Oct. 20, 2022 | Posted by The Alternative Board
Successful and effective business leaders often share notable common traits. You know, things like vision, enthusiasm, and integrity, to name a few. Research suggests however that communication is...
Read More

Oct. 4, 2022 | Posted by Lee Polevoi
Strategic planning is a critically important part of business growth. If a CEO and senior executive staff don’t look ahead to what the future might hold, there’s little opportunity for growth and...
Read More

Wake up and Look at Your IT Security Before it’s Too Late!

Sep. 7, 2022 | Posted by Phil Spensieri
We’ve all read with shock and horror about large cyber-attacks such as the breaches at Target, Netflix, and financial institutions including JP Morgan, but what if I told you that the most frequent...
Read More

LinkedIn Profile Mistakes and How to Fix Them

Aug. 24, 2022 | Posted by The Alternative Board
Every business owner and professional on the planet is at least familiar with the social media behemoth LinkedIn. LinkedIn is the largest professional online network with more than 600 million...
Read More

Aug. 23, 2022 | Posted by Boris Kimelman
Advertising prices are steadily rising and the measurability of advertising tools is eroding. Brands are currently operating in a state of blindness, so it is important for business owners to...
Read More

Aug. 15, 2022 | Posted by Phil Spensieri
If you’re like me and you’ve had your business for 20-something years, then you know that gone are the days of the gold watch for staying loyal to a company for 30 years. Like many of my business...
Read More